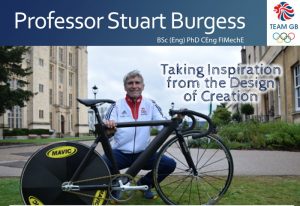 Does God exist? How can anyone believe in religion when science has proved no God is necessary? Is evolution happening today? If there is a loving God, then why do we die?

This is an issue that affects everyone. According to the theory of evolution as taught in schools and universities, there is no need for God – everything made itself.  If that’s true, it means there is no spiritual realm – you don’t have a spirit and there is no afterlife. So ‘spirituality’ is just an ‘evolutionary trick of the mind’!

Hear two of the world’s best communicators on this topic in Canberra.

Stuart Burgess will present case studies carried out by the author of engineering artifacts that have been inspired by designs found in nature.

Professor of Design and Nature, Bristol University, UK.
Professor Burgess has held academic posts at Bristol University, Cambridge University and Liberty University in the USA. At Bristol University he was appointed Head of Department three times between 2004 and 2011. He has worked for the European Space Agency and was the lead designer for the solar array on the world’s largest civilian earth-observation spacecraft (Envisat). He also led the design and testing of the chain drive for the British Olympic Cycling Team who won a record six gold medals at the 2016 Rio Olympics. He was invited to exhibit this work at the Royal Society (National Academy of Sciences) in the UK in 2017 where it received national publicity. He has published over 160 scientific papers on the science of design in engineering and nature.

Mark Harwood looks at the evidence in a variety of disciplines and shows the biblical account of origins provides the best explanation for what we can observe. The Bible’s account of origins is not only reasonable but is the very basis of the Gospel message.

Dr Mark Harwood B.Sc., B.E.(Hons), Ph.D. completed his tertiary education at the University of Sydney. His postgraduate studies were focused on radio telescopes and computer techniques for antenna design and measurement. Mark played a key role in the development of Australia’s national satellite system. He has now retired from the aerospace industry where he was General Manager, Strategy and Planning for the Optus satellite business.

With music from Jazz duo – In 2 Deep

Ps. Kiran Skariah (PastorSKAR) is an ordained pastor who uses the live video streaming platform, Twitch, to share God’s love, support and reach gamers where they’re at. PastorSKAR shares a glimpse into what the ministry is doing and the growth in the 2 years since 1WAY Brekky last talked with him.Listen to the interview at www.1wayfm.com.au/interview-with-pastorskar/ ... See MoreSee Less

We return to the early years as part of the 30 years of 1WAY FM’s transmissions, the year 1WAY FM got is permanent community Radio licence- the year 2000 and in Music retrospective David Webb will be playing recordings by Christian artists from that year.Join us around 7.30am Sunday morning on 1WAY FM, 91.9 and 94.3, DAB+ online at 1wayfm.com.au, at Community radio plus app and on your smart speaker. ... See MoreSee Less

Tapestry portrays Christian song form popular singers including Sir Harry Secombe, Cliff Richard, Judith Durham, Moire Brenna and more.Presented by David Webb at around 6.30am Sunday Morning and 11pm Sunday night on Canberra’s 1WAY FM, 91.9 and 94.3 on the FM band, on Dab + and online at 1wayfm.com.au and the Community Plus app, also on your smart speaker. ... See MoreSee Less

On Sunday 22 May between 11am-3pm, the Australian Croatian Club, the Alliance Francaise of Canberra and the White Eagle Polish Club will come together for the first time to celebrate European cultures in Turner! There will be other European countries represented at the event.Enjoy a selection of stalls offering traditional foods, products, and activities from all across Europe… all in one place! A day of fun activities – traditional Croatian dance, recitals for children, French music – will be set up in Turner @ 66-68 McCaughey Street.We will be collecting for the Ukraine.Hope to see you at this first edition of the European Multicultural Festival!Entry is free!!!For more information visit australiancroatianclub.com.au/event/mini-national-multicultural-festival-canberra/ or visit our Facebookpage: www.facebook.com/events/721446475657499 ... See MoreSee Less