Give a Miracle of sight 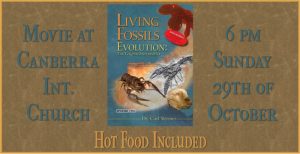 Did dinosaurs live millions of years ago, with other strange and
unusual extinct animals, as the theory of evolution, suggests?
Or did they live with modern plants, animals, and humans
only thousands of years ago, as portrayed by the story of creation?

Dr. Carl Werner travelled 160,000 miles to find the answer, visiting 10 dinosaur dig sites and 60 natural history museums. To his surprise, he found examples of all of the major plant divisions and all of the major animal phyla groups living today, fossilized alongside the dinosaurs.

The biggest discovery Dr. Werner made was that some of the most important fossils were not displayed in any of the museums he visited. Have natural history museums withheld these critical fossils from their public displays, fossils that would place the theory of evolution in jeopardy?

This DVD has the feel of a PBS documentary, with British narrator Andres Williams, and contains spectacular underwater footage of Dr. Werner diving at the Great Barrier Reef in Australia and the coral reefs in the Caribbean Sea, plus footage from dinosaur dig sites in Europe and North America.

Filmed over 13 years on three continents and eight countries including many active dinosaur dig sites, museums and universities.

We love this, Monique Lanham!Thanks for being a miracle giver and taking part of this amazing opportunity with us! 🙌You and everyone who has donated this Miracles Day are awesome! ... See MoreSee Less

When this happens, it's usually because the owner only shared it with a small group of people or changed who can see it, or it's been deleted.
View on Facebook
· Share

The response that has come from partnering withCBM Australia for Miracles Day has been incredible.Our station manager, Jenny, shares a bit about the what Miracles day means to 1WAYFM.Last chance to donate a miracle of sight to someone in need!Run, don't walk! 🏃‍♀️miraclesday.com.au/lway#MakeMiraclesHappen #miraclegiftofsight#MiraclesDay #10yearsofmiracles ... See MoreSee Less

Timeline photosMIRACLES DAY TURNS 10! 🌟Over the past few years, you have delivered colour, light and hope to people who have had their vision clouded by cataracts. We can’t slow down now. Let’s make this year bigger and brighter than ever — by delivering 52,000 miracles. Just $33 can give restorative eye surgery to someone needlessly blind from cataracts. Together, we can give the miracle of sight to those most vulnerable. cbm.org.au/miraclesday #MiraclesDay ... See MoreSee Less

🎉🎉🎉 MIRACLES DAY IS HERE! 🎉🎉🎉Everyone at 1WAYFM is so passionate aboutMiracles Day and we love teaming up withCBM Australia and getting involved every year.Jenny, our dedicated station manager, also hasa heart for Miracles Day and all that CBM Australia do.She shared a bit with us about Miracles Dayand what it means to her.If you also have a heart for those in need…DONATE TODAY: miraclesday.com.au/1way#MakeMiraclesHappen #miraclegiftofsight#MiraclesDay #10yearsofmiracles ... See MoreSee Less